So, which promises did you make to yourself for 2016? Be a better spouse, a better parent, a better son/daughter? Stop eating peanut butter at night while you’re on a diet during day time? Eat more greens, hit the gym every second day. Become tall and beautiful. Try to keep a girlfriend. Wait. Try to find a girlfriend. Spend less time on Facebook. Spend more time with your family. Is this blogpost making you feel guilt already? Don’t be, it’s all going to be okay 🙂

In Norway too people make new year resolutions, a fact I just realised. The first time someone asked me what my resolutions were in Norwegian I thought the person said “What is you new year’s continuation?”. Huumm I will continue my job, hopefully. And my family life. And my friendships. What kind of question is this? The Norwegian word for new year’s resolution is extremely confusing:  nyttårsforsett means new year’s resolution, which I misunderstood as nyttårsfortsett (this word does not exist by the way). Forsett is a resolution, add one letter and that means to continue (forstsett).

So it gave me the idea to write a comparison between new year’s resolutions of two different categories of people living in Norway: the locals and the immigrants.

1- Spend less time in tidsklemma and more time to breathe and enjoy the moment.

2- However, still manage to train more. Running, swimming, cross country skiing etc. This might seem usual and common to other nations, but in Norway it is more extreme. For many it here is not just about losing weight, but also about gaining muscles and showing them (even for women). The search for perfection is a national sport in this country.

3- Redecorate and refurbish one’s interior in 2016. Again. People in this country seem to be continuously refurbishing a kitchen, a bathroom, choosing a colour of paint for a wall (which always ends up being white). The process of how those interior design changes are going to happen feeds endless conversations between colleagues and friends. In other countries those changes happen every generation, here in Norway it happens every third year. Key words: interiør, pusse opp, polakker.

4- Stop snusing. Snus is that bag of tobacco Norwegians (and Swedes) put between their lip and their gum to get just the right amount of nicotine without bothering their friends. It won’t give you lung cancer, but is still highly addictive and quite expensive. Like anything fun in Norway.

5- Take more mountain trips. That picture on your Facebook in front of some fjord is getting old. And then one on Tinder. Time to renew the illusion that you actually love to go on mountain trips for 8 days with dehydrated food and sore feet. Key words: fjelltur, turmat, regn, hytte, blemmer.

6- Stop worrying about everything. Stop feeling guilty. Stop feeling responsible when seeing poor people on television. Give your time, become a volunteer for the Red Cross. Become a planfadder.

7- Eat healthier. Cutting on Grandiosa pizza, eating more than one vegetable a day (ketchup in your Narvesen sausage does not count as a vegetable).

8- Stop hiding away during your borettslags (housing association) dugnad. Come on, you knew it was today and you went to the movies and for a sleepover. Came back the next day when the gardens were cleaned and the fences painted white again.

9- Buy your dream hytte. With a private access to a lake and no neighbours. So you can stop sharing it with your brother who is a pain in the ass and makes you pay all the bills.

10- One that should be there but isn’t named often is to reduce personal debt. Norwegians have an unbelievable amount of debt but do not seem to be worried a bit about reducing it. Not those I talked to at least. Instead they have resolutions such as buying a hytte or a car. Both of which significantly increase debt.

1- Start using those skis and actually skiing for more than 3 kilometers without giving up.

2- Stop complaining about Norway, especially the weather and alcohol prices.

3- Read a whole book in Norwegian which isn’t a children’s book.

5- Get a job where no one calls us a jævla utlendinga. (Which means something like bloody foreigner)

6- Learn to walk on ice in order to stop looking like a fool when wearing crampons.

7- See an aurora borealis, also known as Northern Lights. Full buses of tourists go to Tromsø and the rest of Northern Scandinavia to see those, driving for hours and staying out by cold temperatures to see them. It is worth it! (so I’ve heard).

8- Try to make Norwegian friends and be invited to a real Norwegian home for dinner. I know, a high expectation after 3 years in Norway.

9- Get used to rømmegrøt (a meal made of cream and butter), and eat everything on the sheep’s head when served smalahove. Even the eyes.

10- Run on a Norwegian lake with a spark. (A spark is a chair with blades on which Norwegians traditionally ride on icy surfaces). Okay this might not be a general immigrant’s dream, but it is mine 🙂

What is almost sure is that like most people these 2016 resolutions will end up as “first week of 2016” resolutions. So drop making promises to yourself every year. Be kind to people in your everyday life, including to yourself. And be grateful for what/who you have. In case of dreams you want to achieve, it is just about trying very hard and it will probably happen! Unless it is to meet a penguin and a polar bear in open Oslo like my brother, but that is something else. 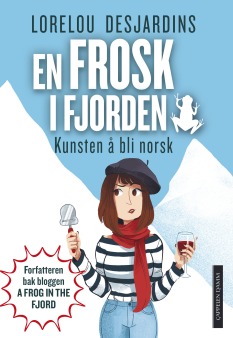